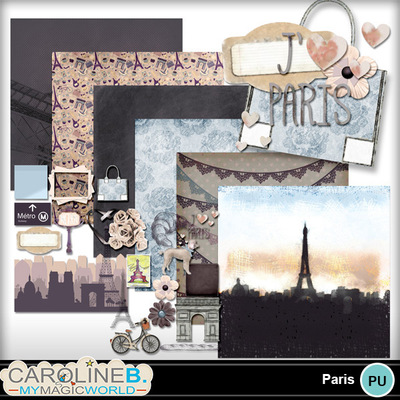 More By This Designer

How do you know what Terms of Use a kit has?
Look in the lower right corner of the kit preview for one or more of the following icons.

Paris (French pronunciation: ?[pa?i] is the capital and most populous city in France. Since the 17th century, Paris has been one of Europe's major centres of finance, commerce, fashion, science, and the arts. The name "Paris" is derived from its early inhabitants, the Celtic Parisii tribe. Paris is often referred to as The City of Light (La Ville Lumière), both because of its leading role during the Age of Enlightenment, and more literally because Paris was one of the first European cities to adopt gas street lighting. Since the late 19th century, Paris has also been known as Panam(e) (pronounced [panam]) in French slang. BUT, Paris is the city of the lovers, ans a romantic place to go in honeymoon, or with the love of your life. Perfect spirit to make Valentine album or to have a Rendez-vous with love ! ! Ah... l'amour !! Et voilà !